Welcome to our quick information dump on Bosch TPS (Throttle Position Sensors). Specifically for the 0280 122 001 models, but This may include other models as well.

We've recorded these notes and observations not only for ourselves (because we forget stuff over time), but also in case anyone else can find it useful. If you find something incorrect or wish to contribute something, just let us know here.
Use and function
Failure symptoms and troubleshooting


These sensors are used on several different EFI (Electronic Fuel Injection) systems, including, but not limited to, Volvo engines and Kohler engines. This sensor outputs a resistance reading according to where the throttle plate is located on a 90 degree arc. Pins 1 and 3 when closed is a reading of approximately 1,100 ohms; fully open is approximately 3,500 ohms. Readings on the arc in between will vary on this range. There will some slight factory variance in these readings, which is why a procedure exists for calibrating the physical throttle position to a specific output when a different or new sensor is installed. 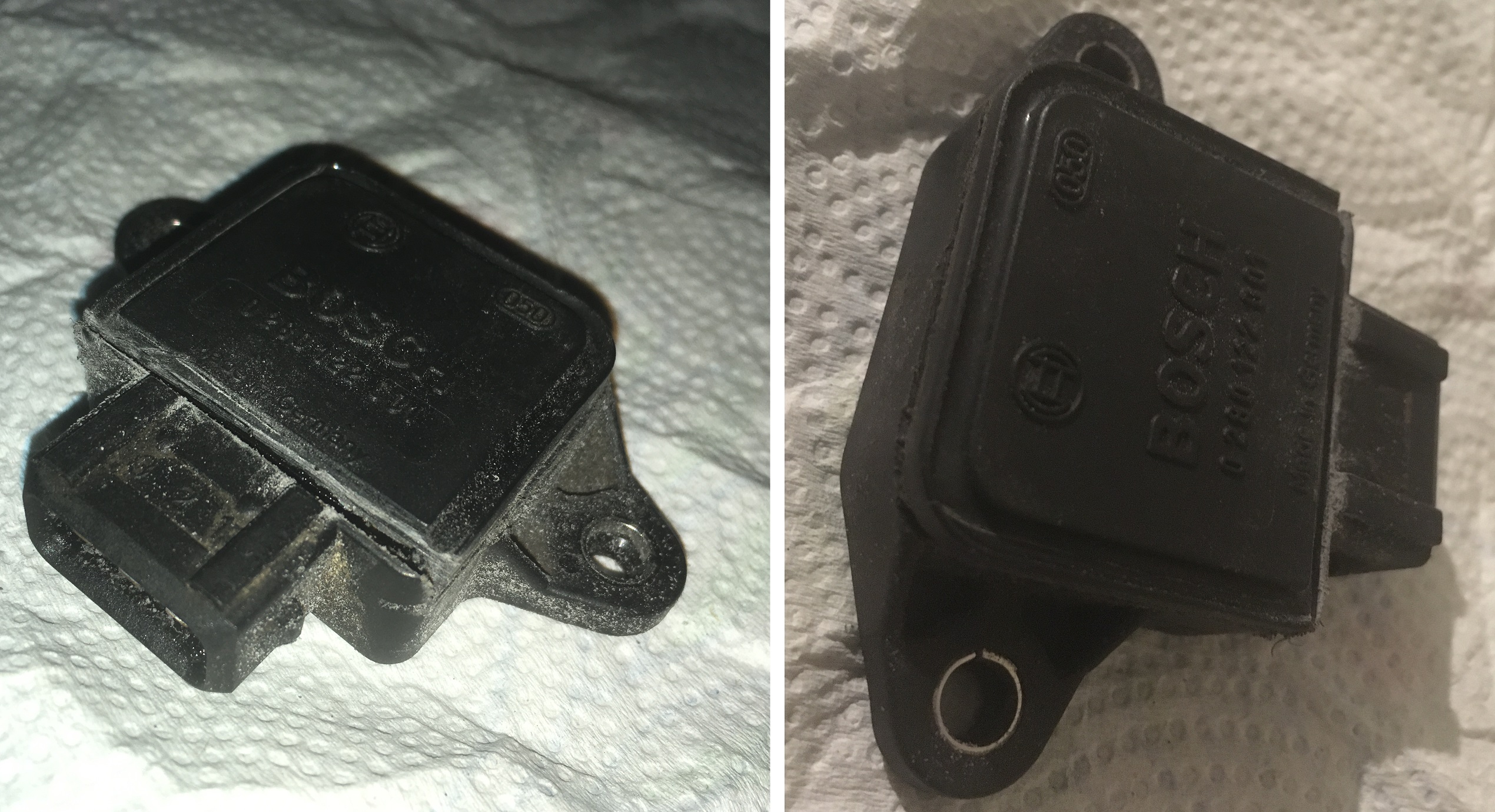 The sensor has two internal variable resistance paths, which are only connected by the copper sweeper bar and fingers of the rotor. The end of the first resistance path connects directly to pin 3. The ends of the second path connect to pins 1 and 2. Most commonly the readings between pins 1 and 3 are used, but 2 and 3 may be used as an additional reference, and will be different, obviously, with a differing range.

Physically the throttle plate bar connects directly to the plastic rotor. On the end of the rotor are two copper contacts, joined in the center. The end of each contact has metal fingers which provide movement relief for the slight distance the rotor may move within the casing, and ensure sharp copper does not erode the paths on the board. The end of each contact's fingers contact their respective paths.

Although the unit is advertised as a sealed unit, it is not in fact entirely sealed. The hole which recieves the throttle bar and contains the rotor leads directly into the case and is not an airtight seal. The seal of the system relies entirely upon the joint at the throttle body. There is an o-ring provided at this juncture, however repeated instances have shown that fluid and sometimes debris can penetrate along the throttle bar itself, and follow this path into the casing.


There are not many ways the unit can fail. One is wear over time, as the contacts and paths wear. Another is dirt, debris, or contamination inside the unit which can cause wear. As mentioned previously, the unit is not entirely sealed and therefore can collect foreign matter. If any of this injures the fingers on the ends of the contacts, the unit will not function correctly. There is no remedy for this other than replacing the unit. Some sources have indicated cleaning with a fluid cleaner through the hole may clear up erratic readings, but this will only work in cases where the paths or contacts have become too dirty. In our experience this rarely works.

The unit may fail entirely yielding an open circuit and associated errors, or it may become erratic and unstable, outputting readings that jump slightly or phase quickly between open and the proper reading. This can be easily verified with a meter, observing the resistance readings as the rotor is turned. If the unit outputs erratic readings the engine may still function, but the throttle speed may surge or not register properly. 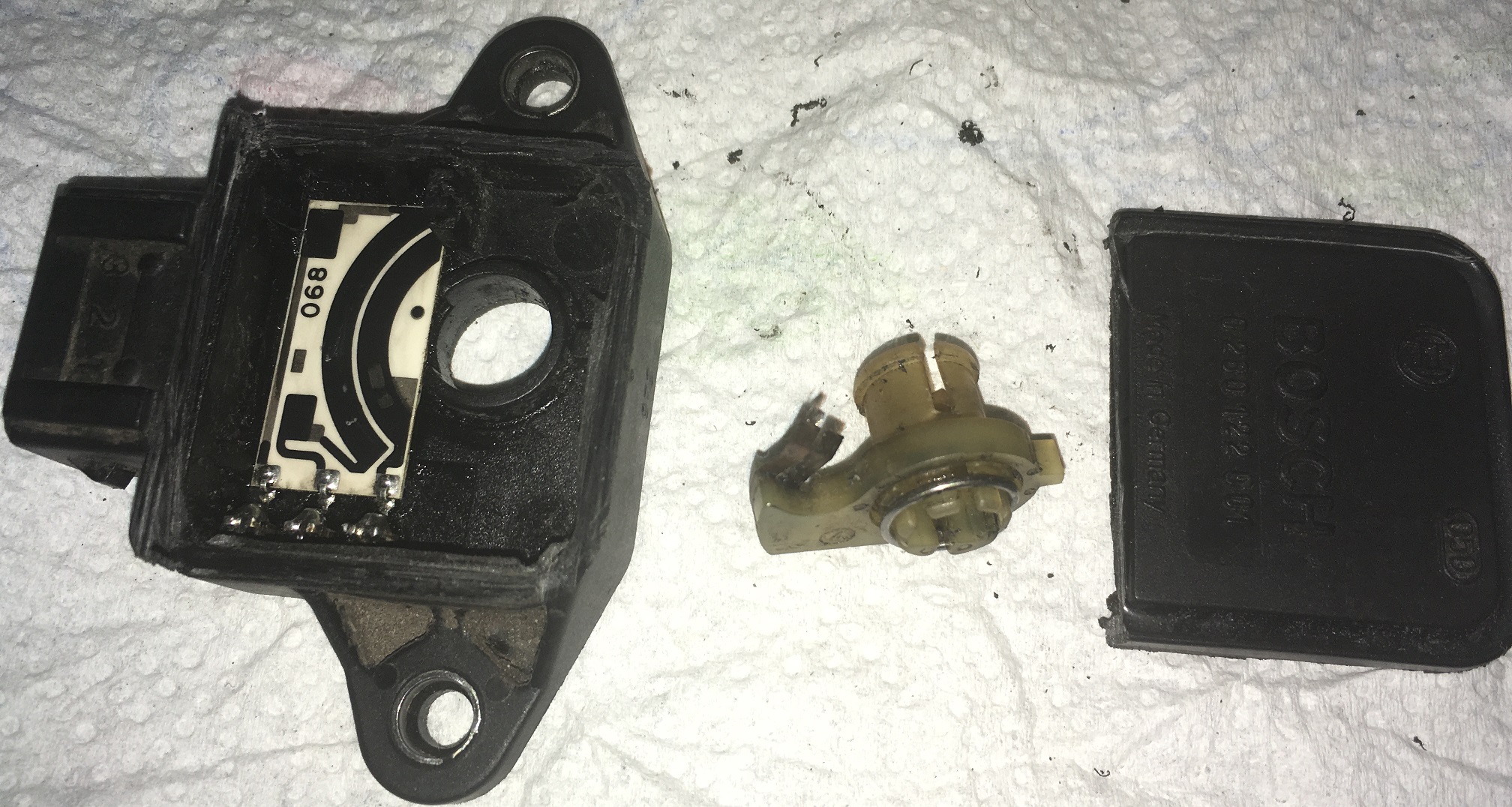