Welcome to our page regarding repairing our 1986 GMC Sierra 2500 utility bed truck and getting it roadworthy once more.

We include this page as an interesting reference of our own experiences, in hopes that it might be useful to others in some manner.
Arrival condition
Information
Cab metal repair
Air conditioning repair
Overheating
Final


This truck was purchased for use as an on-site work truck. The criteria were: something that could carry a decent amount of tools under locked, easily accessible, and weatherproof storage; something that fit with our classic vehicle vibe; and something that had an a/c system (mainly because we have a dog that frequently travels with us).

We were looking at a wide range of vehicles including step-vans and full size vans. Enclosed cargo vehicles in our area are fairly expensive for some reason, even used and abused. We finally settled on this square body truck because it fit all our criteria, was available, and was relatively affordable.

This is a 3/4 ton truck, at some point in its life refitted with a Knapehide utility bed. A previous owner had put on late model steel wheels, which they unfortunately painted matte black. The utility bed is not in great shape, having some holes and general rust. The cab has very rusty floors and rocker panels.

At first glance, the engine runs ok, and it has a dealer-installed air conditioning system that is presently unbracketed and tied up to the side of the engine bay. It is a verified original 350 cubic inch engine (stamped VIN in pad) with a TH400 transmission. Someone added aftermarket dual exhaust with mufflers much too loud. It also has the key to all the locks on the bed, which is a requirement.

The interior has a lot of extra floor ventilation, a ripped seat, some general cosmetic issues, about a quarter-inch layer of dirt and grime on everything, and some gauge issues.

The passenger door has been involved in some sort of horrific collision and more horrific repair attempts. The mirror isn't very tight and rattles a lot. Both door seals are terrible and we later discovered the cab leaks water horribly from just about everywhere.

This thing is.... well, pretty rough. We talked the seller down some, but in the end clearly not enough. There were a lot of hidden things that were only discovered after we started tearing into it. The goal is to make this a usable, relatively comfortable, and easily driveable work vehicle for on-site service. This truck will not be getting a full restoration or anything close to that; rather we just need a reliable working truck in this case.


This truck was originally midnight blue, but at some point was repainted to white, and then at some point recently somebody gave all the worn spots a rattle-can touch up. Right over most of the rusty spots. The engine appears to have had some work done, including emissions equipment removal. We were told it had camshaft work done, although there is no way to verify this.

We quickly discovered on the ride home that after more than ten minutes of driving the engine starts to overheat, which was not disclosed by the seller, unfortunately. The extra floor ventilation also was extremely uncomfortable at highway speeds and turned out to be even more extensive than we originally supposed. The seat has large chunks of foam missing, which makes it uncomfrotable. The passenger side mirror rattles and vibrates because the door is so deteriorated.

The factory label is in the glove compartment, so we can decipher that to check the truck's equipment options. 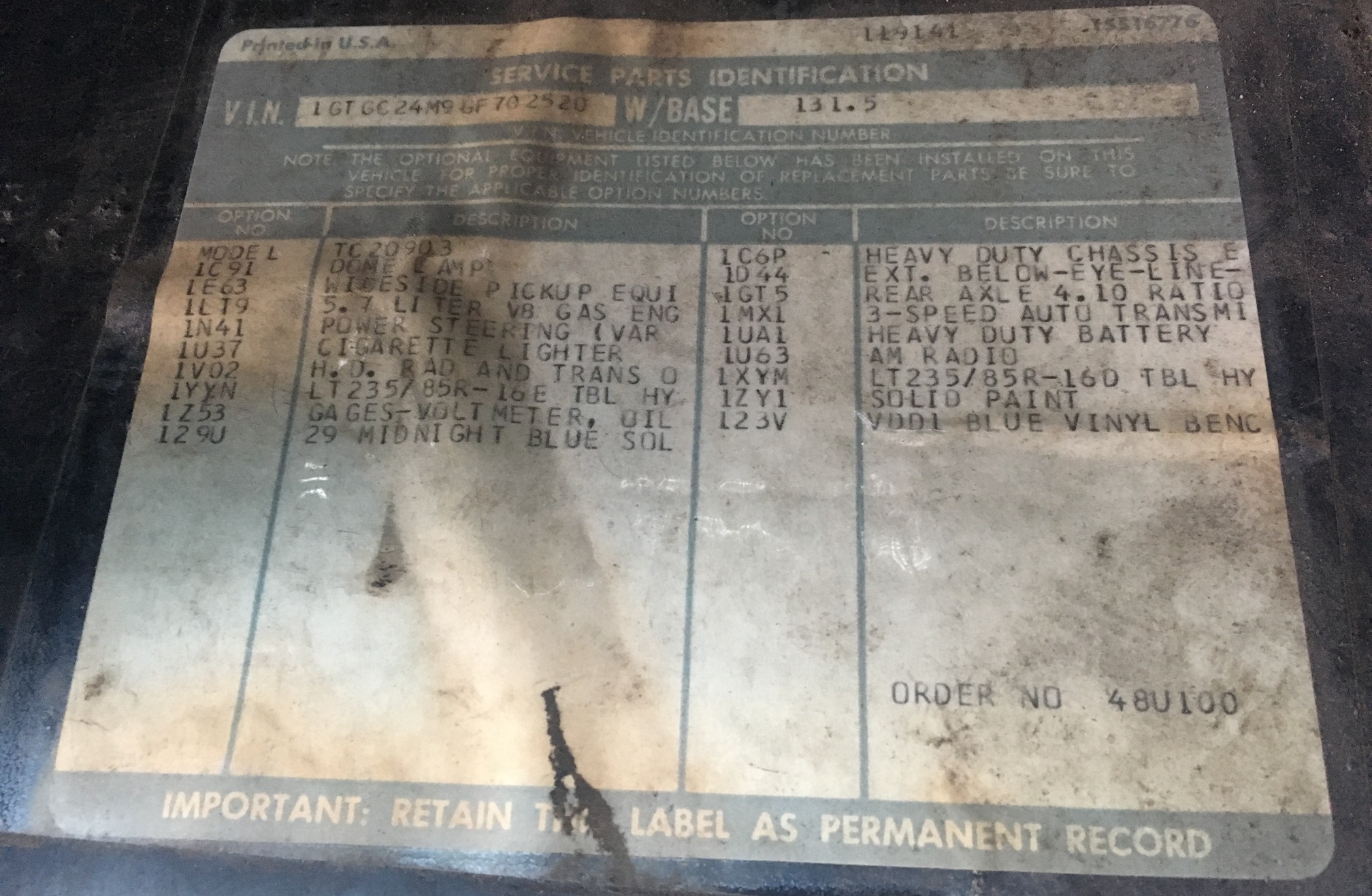 
The factory radio is long gone and the metal cut out for a newer radio. We will not be worrying about that because this is not a full restoration. Most likely this truck will not get any radio at all.

The 4:10 rear axle ratio will make this truck nice for towing, which is one use we intend it for. It also has the full gauge package, excluding tachometer, which we prefer over dummy lights.


We knew the cab floors and rockers were partially rotted out when we purchased this unit, but we did not realize just quite how extensive the damage was. Originally the intent was to put it to work without deep metal repair, however the damage was just too extensive.

It turned out the driver side floor was almost completely gone in the foot section, and the passenger side wasn't much better. This seems due to severe door seal and firewall leakage, as well as one of the air conditioner evaporator drains not being properly routed and draining onto the cab floor. We did replace the door seals and re-seal the firewall and cowl area, which had some plugs missing and chunks of sealer deteriorated and missing.

The first step was to strip out the remaining rubber floor and trim. The driver side turned out to mostly just be supported by an old mud flap.

After seeing what we were in for, we ended up pulling the seat and pretty much everything around the floor area. Then we cut away the rusted metal, wire-brushed the edges and sprayed with weld-through primer.

New floor pans were welded in and seam sealer was brushed on. 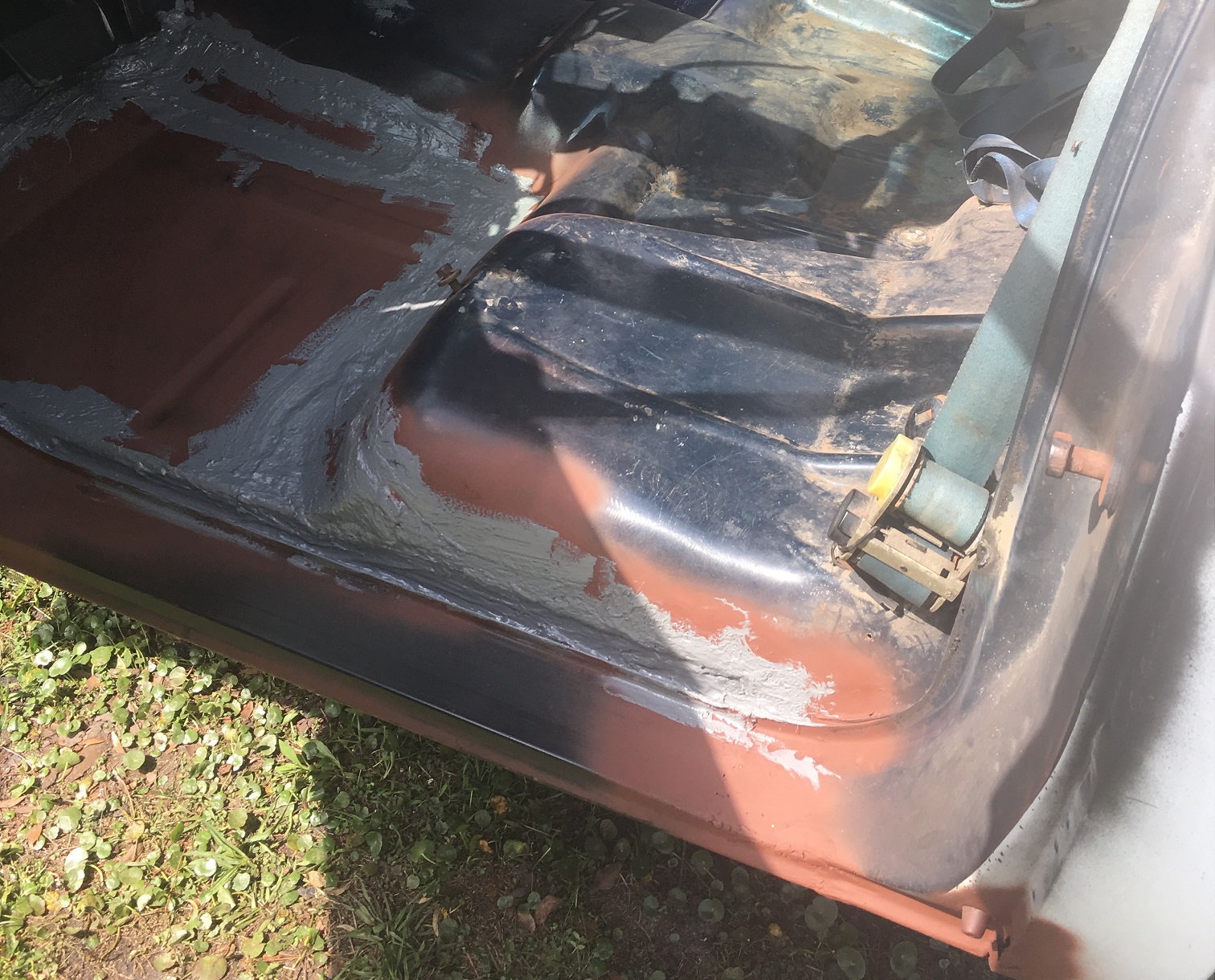 Finally some close-to-matching blue paint was thrown on. We will be putting in a new rubber floor so the color does not terribly matter.


This truck did not come with factory air conditioning, but does have an aftermarket system dealer-installed from Clardy Manufacturing. It uses a York rotary compressor, a thermal expansion valve, and no pressure switches. A digital controller run from a thermostat on the evaporator controls the compressor on/off cycles.

The custom evaporator sits in a custom plastic case with custom ductwork run to factory-style dashboard vents. All the custom parts were made by Clardy specifically to fit inside the dashboards of these trucks. The a/c system uses a dedicated blower motor, with all the existing heat and defrost ductwork for the heater remaining untouched. The a/c system runs only to the mid-height dashboard vents.

The system is controlled with a slightly modified factory heat/defrost control panel. The 'off' position of the upper slider becomes 'a/c' and the new on/off function is now controlled by the blower switch. When on 'a/c' the air conditioning blower and system runs, while in 'heat' only the heat blower runs. The lower slider remains unchanged and determines how much the door from the heater core airflow opens. On 'cold' the door is completely shut, and on 'hot' it is completely open. Any variation between gives an appropriate mixture.

This system had already been converted to R134a at some point. The compressor bracketry was missing, with the a/c compressor tied up to the side of the engine compartment. It was still hooked up, fortunately. Systems open to the elements for years have a low probability of working without serious time and money invested.

Step one was to figure out bracket arrangment and see if we could fabricate a test bracket to test-operate the system before checking what parts we would need to find and purchase. We could not locate an appropriate bracket for purchase that was assured to work.

Some quick measuring and fabricating gave us a usable bracket. It was unclear what the original belt arrangment Clardy intended in this situation, so we started by replacing the power steering pump pulley with a double V-groove unit and running the compressor off of that.

Surprisingly, the system vacuumed down and held. We pressurized and oiled the system, and fired it up for testing. It cooled fairly well, but built high side pressure slowely and did not pull down the low side pressure well enough. The system was vacuumed down again and disassembled, with the thermal expansion valve being replaced and all parts checked out. The system worked good enough for our purposes, although not as well as a new system. This is a system originally intended for R12 refridgerant, so it has limitations running on R134a. 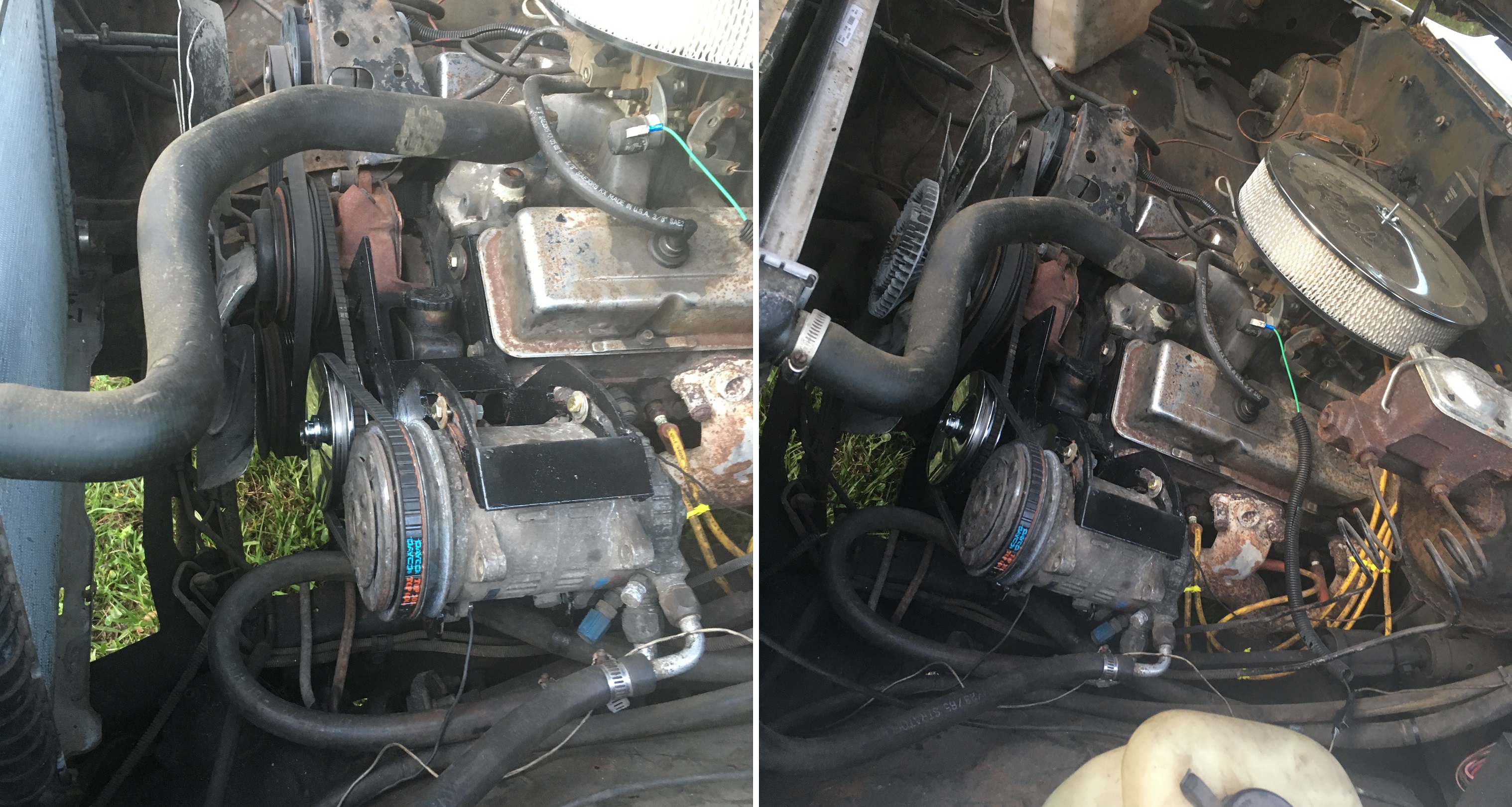 Testing showed that running a belt from the power steering pulley alone would not be sufficient for long-term use. The belts tended to slip when warm and there was some vibration that tended to cause looseness during operation. We opted to modify the bracket slightly to push the compressor forward further to use the pulleys on the nose of the engine over the water pump and crankshaft that had originally been used by the emissions air pump (now gone).


To address the overheating issue, we looked at the entire system for clues. The engine temperature spiked dramatically during acceleration, then would back off slightly when engine speed slowed. We checked the engine timing and found the adjustment was very far out of specification, and the vacuum advance was connected to the wrong carburetor port. Remedying these problems removed the RPM-related temperature spikes.

Testing showed that temperature still ran too high during low speed or idle conditions, but lowered during high speed driving. We next moved to the cooling system itself for examination.

The inside of the system showed dirty brown coolant, and the overflow tank was brown and sludged. We removed the hoses and thermostat, flushed the entire system, put in a new thermostat and refilled the system with fresh coolant. While this service wasn't completely necessary, the coolant condition, thermostat, and flow was now verified to be good. Unfortunately the engine still ran hot under low speed, high load conditions (a/c on, in geat, etc.).

Examining the radiator and cross-referencing data revealed the radiator was not original and, while fairly new, not correctly sized. It is a single-core, aluminum radiator with built-in transmission cooling, and not full height and width for the application. With the transmission cooler built-in, the undersized unit had to cool the entire drivetrain and be sufficient for heavy duty operation also. There were several options at this point that might work; replace the radiator with a larger unit to add capacity or add airflow through the radiator.

The factory cooling airflow system also was designed to cool the radiator alone. This truck has an added air conditioning condensor and a seperate additional transmission cooler (hooked in series with radiator cooler) that it must pass air through. The condensor has very tight coils and is more restrictive to air flow than a standard radiator, in addition to the extra heat transfer load.

Replacing the radiator is a pretty expensive option, and would still not address the possible airflow issues. We opted to first increase the airflow and see if we could resolve the issues that way. We replaced the factory viscous-clutch fan with a fixed unit that would always flow the maximum amount of air for respective RPM. We also added two electric fans with temperature control.


See a walk-around video of this truck here.

Interior panels were quickly stripped and painted, and various miscellaneous cosmetic issues resolved. Since this is a work truck not much was done with the exterior since that doesn't affect comfort.

We added a generator and air compressor that we had laying around to the utility box. The generator is rated for 5000 watts and the air compressor is sufficient to run one small air tool at a time, which should be enough for our purposes.

The vinyl bench seat was repaired by splicing in foam for the missing sections, then creating a working surface over that with tape and heating the tape to seal the edges. A tight-fitting cover over that is used to create a more durable work truck seat.