We've recorded this rebuild procedure and associated notes not only for ourselves (because we forget stuff over time), but also in case anyone else can find it useful. If you find something incorrect or wish to contribute something, just let us know here.
Description
Rebuild procedure
Electrical
Troubleshooting


The wiper motor unit covered by this article is not intended to be rebuilt, and the case is crimped together. It is not made to come apart. They can be fairly expensive to replace with a good quality unit. That being said, it is possible to rebuild the unit if you have access to any replacement parts that may be needed. And once taken apart and the crimps replaced with bolts, it is more easily rebuildable in the future.

This article covers the wiper motors with two electrical plugs, one two-pin for the parking switch and one three-pin for the motor control. It uses a permanent magnet DC motor, with constant +12v supplied and a switched ground to control high/low speed. There are three carbon brushes; one being common, and one each for high and low speeds.

Parking is controlled by a raised section on the internal gear, which triggers a switch at a certain degree range of travel. This breaks the park circuit and stops the wipers when they reach that point in their arc, and the switch is turned to 'off'.

Before blaming the motor for operation issues, check wiring and function of the wiper transmission linkages. Loose grounds or stiff linkages can lead to overheating of the motor circuits, which can trigger the internal circuit breaker and temporarily stop the motor until it cools enough to close the breaker.

The gear drive is a worm gear arrangement, with a metal worm screw and a nylon worm wheel. The metal screw is attached directly to the motor shaft. The motor shaft has a bearing between the worm and the drive rotor of the motor, and another bearing on the far end of the rotor. The worm wheel gear shaft rides in another bearing through the side of the case. An screw on the end of the case provides lash adjustment for the worm screw gear. Tightening this screw will reduce the end-to-end play of the motor shaft and gear.

Mechanical failure points can be the gears themselves (primarily the weaker nylon gear), and the bearings. Electrical failure points are the three carbon brushes, the switch contacts in the thermal breaker and the contacts in the park switch. Additionally the gear grease used during assembly can break down with age and become glue-like. Contamination from degraded brushes can also clog up the motor internally and cause issues. Rebuilding the motor can clean and decontaminate these parts, as well as identify any broken or worn parts that require replacement.


Once the motor is removed from the vehicle, the crimps can be drilled out of the case. Do not drill the holes out too large or it may weaken the case or prevent using small enough bolts during reassembly.

Before separating the two halves, bend out the retaining tabs on the end of the motor that hold in the brush assembly. Then the halves can be separated to access the internal parts. 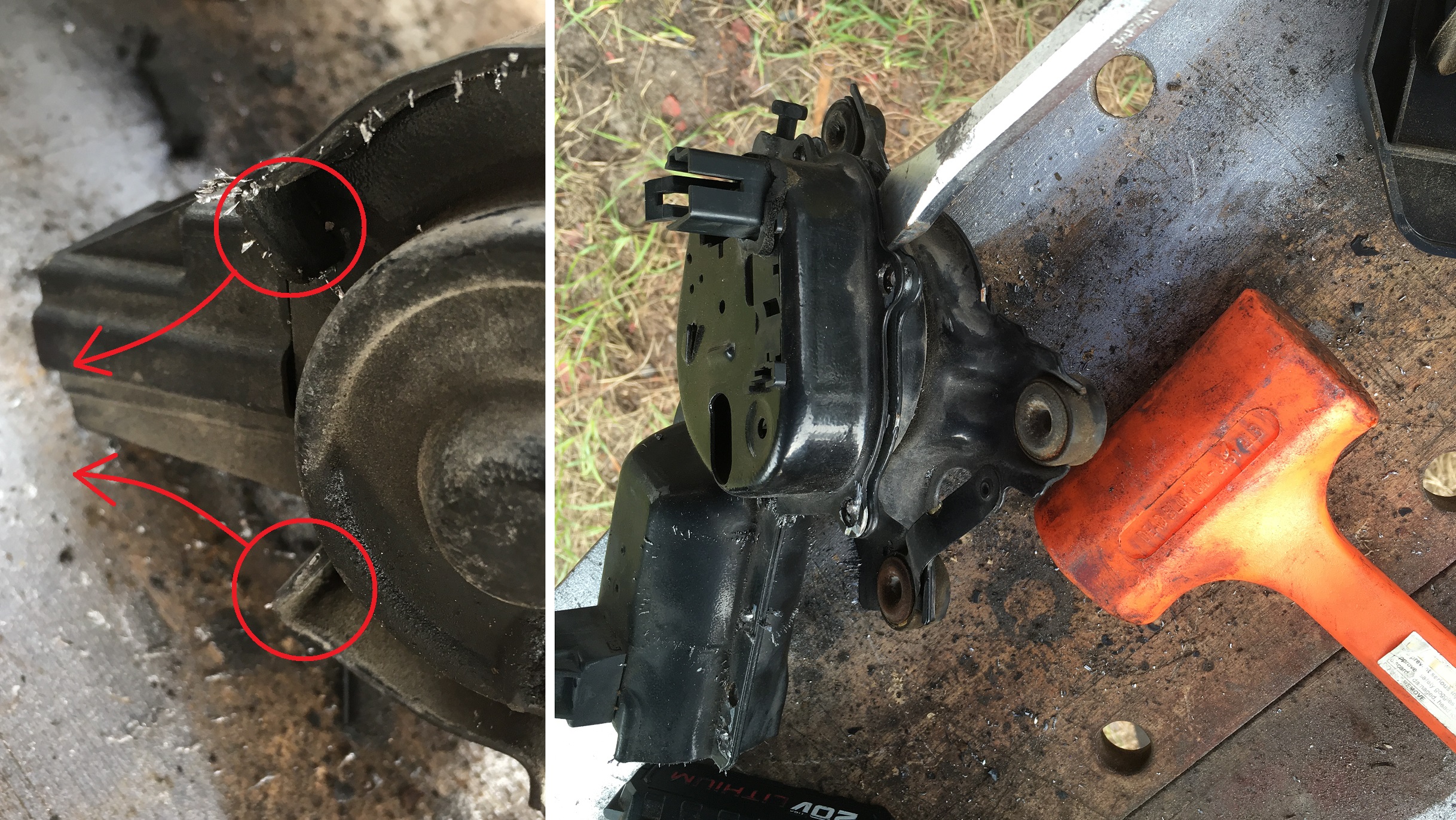 When the motor case halves are separated, the brush assembly may be removed from the end of the motor shaft. This contains the three brushes and the motor end bearing. Be careful not to break the plastic retaining tabs of the electrical plug where it joins the case. 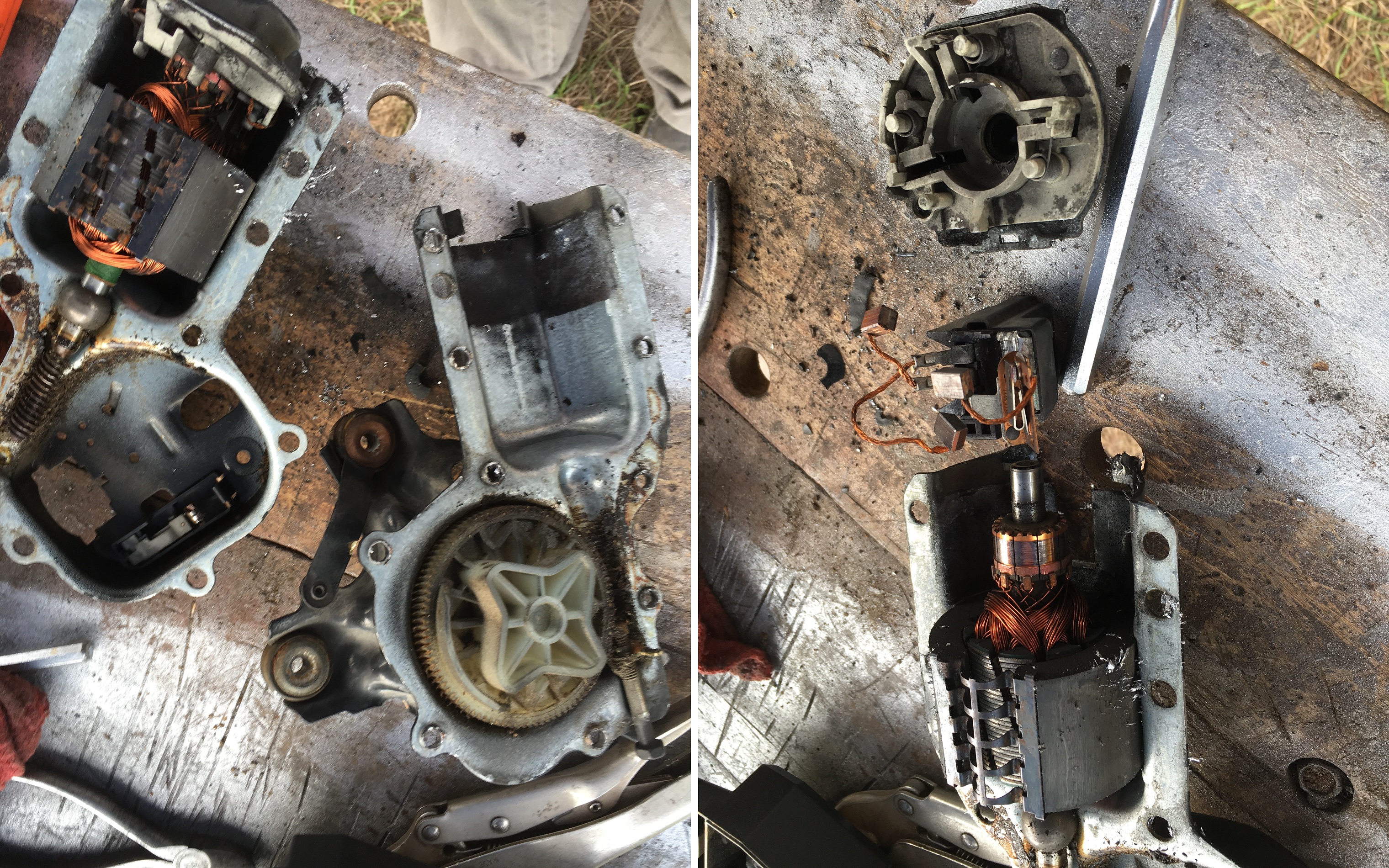 With the brush assembly removed, the rotor and magnets may be lifted out of the case, along with the other bearing around the motor shaft.

The nylon gear shaft is retained with a C-clip, and will have spacing washers behind the clip. Before sliding the shaft out of the bearing, it may be necessary to lightly sand any imperfections or scratches in the end of the shaft so as to prevent damage to the bearing. If the shaft does not pull out of the case bearing smoothly, lightly abraid the exposed end of the shaft until it can be withdrawn.

The lash adjustment screw and clip rests in two opposite slots in the case, and can be lifted out. The park position switch is behind the plastic cover on the outer case half, and can be removed by squeezing the retaining tab at one end.

When completely disassembled, the unit will look like this:

With all parts on the bench, examine each for excessive wear or damage. Check that the gear grease has not degraded, and if so thoroughly clean all old grease out of the case and replace with fresh high temperature grease during reassembly. Check bearing play and clearances. If brushes are not excessivly worn or damaged, they may be reused. Make sure to thoroughly clean the motor case halves before reasembly.

Reassembly is the reverse, with some tips to make it easier. When installing the brush head on the motor, release the springs and slide the brushes all the way into their slots. Place the assembly on the motor shaft, and then re-seat the springs to apply pressure to the brushes. Then place the magnets around the rotor, and place the rotor and brush assembly into the case half with the electrical connector. 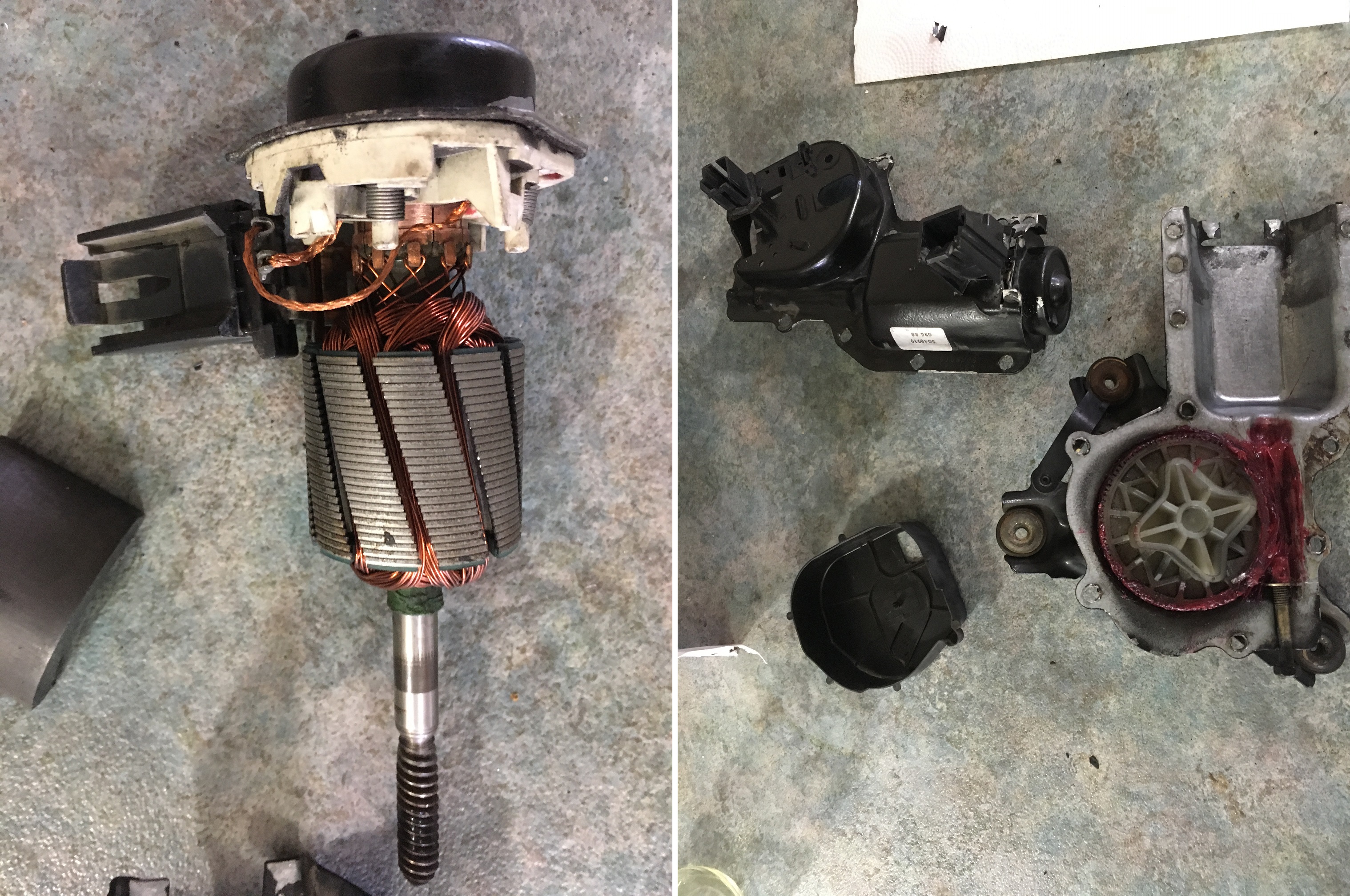 Replace the drilled out crimps with appropriate nuts and bolts. We prefer nylon locking nuts to prevent loosening. 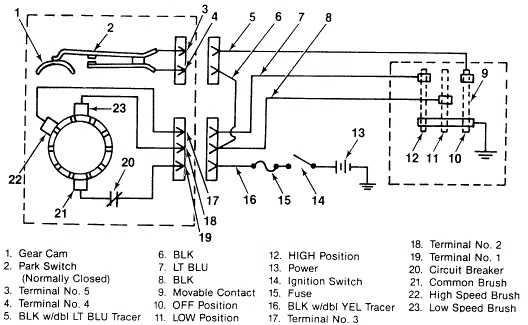 The motor is controlled through three carbon brushes. One brush is common, and the other two each provide either high or low speed respectively. +12v DC is provided at all times when the ignition is on. The switch controls the ground side of the circuit.

Variable speeds are controlled through a separate box, which when activated at the switch, cycles the motor on the low speed circuit. This system uses the same motor, with a different switch and an added 'pulse module' to control the delay. 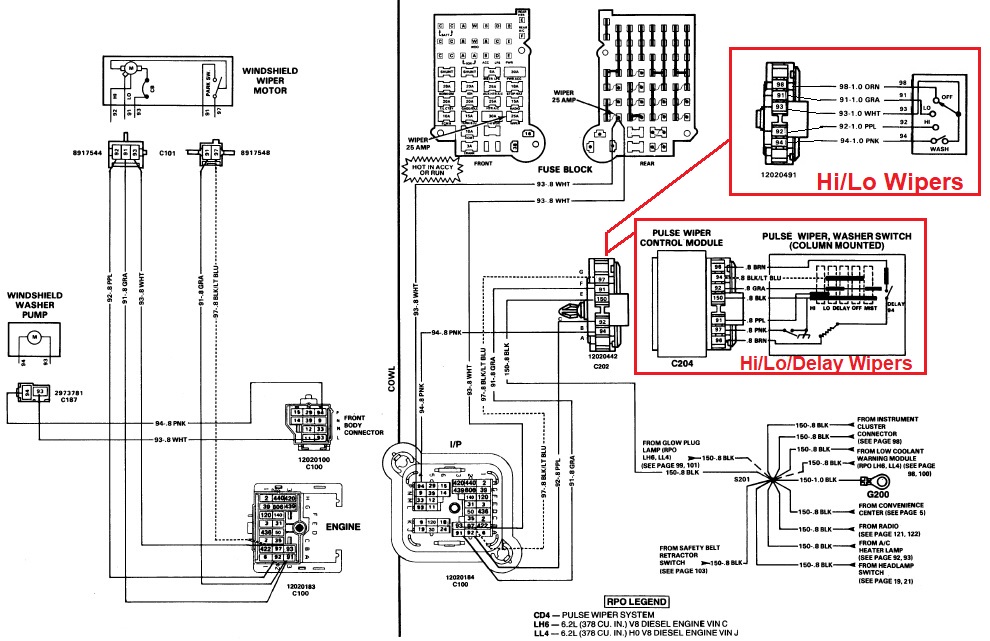 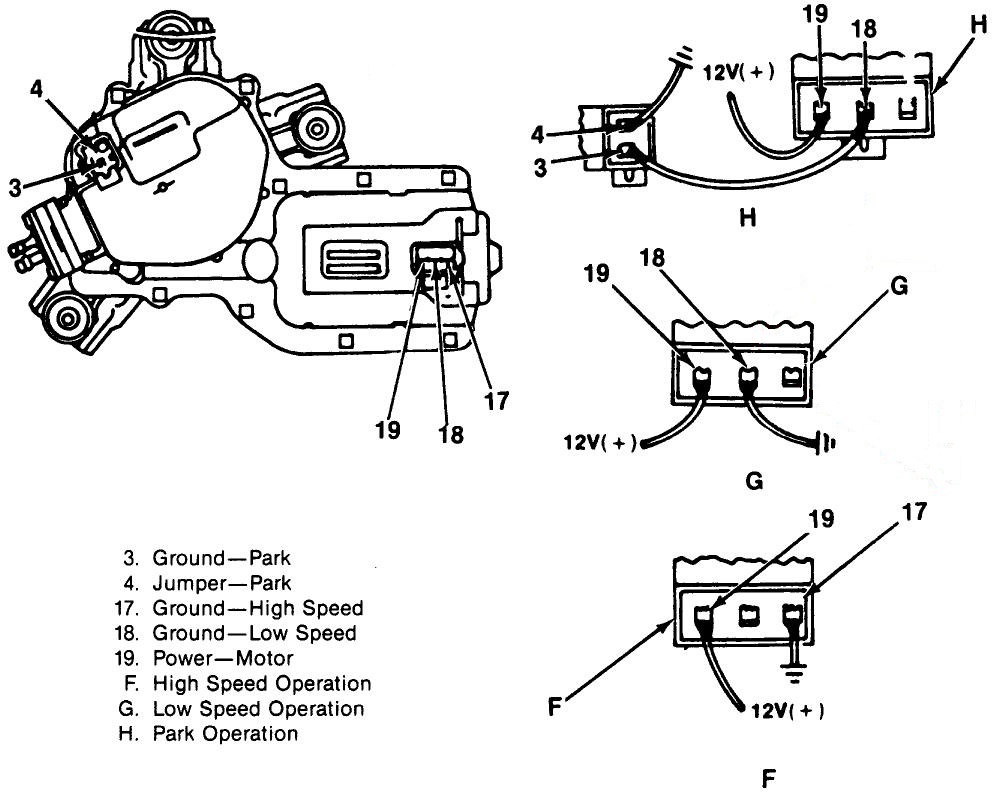 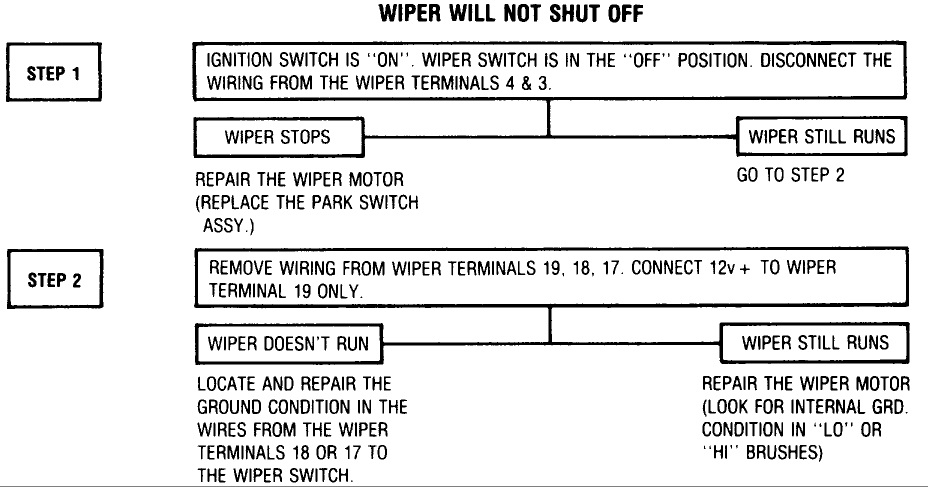