We've recorded these notes and observations not only for ourselves (because we forget stuff over time), but also in case anyone else can find it useful. If you find something incorrect or wish to contribute something, just let us know here.
Functionality
Component operation
Troubleshoooting
Disengagement switch
Control stalk


Note that this article is only for the 1983 forward Custom Cruise III systems on the 'square body' style trucks. 1988 and forward newer body style trucks used a different system.

The mode control assembly consists of a 3 position slide-type switch and a set/coast switch button. To operate the system, the slide switch must be in on position and vehicle speed must be above 25 m.p.h.. The system is engaged at the desired speed by fully depressing, then releasing the set/coast button. Cruise speed can be increased from set position by accelerating vehicle to desired speed, then pressing and releasing button. In order to decrease speed, the set/coast button is held in the fully depressed position (disengaging system), then released when the desired speed is reached. The system can be disengaged at any time by depressing the brake or clutch pedal, or by moving the slide switch to off position.

The slide switch also allows a 'tap-up' function to increase cruise set speed in 1 m.p.h. increments. With the cruise control engaged and operating, 'tapping-up' is done by pressing the slide switch to the resume position, then quickly releasing it. This procedure can be repeated 10 times before the system must be reset to a new speed in the conventional manner. 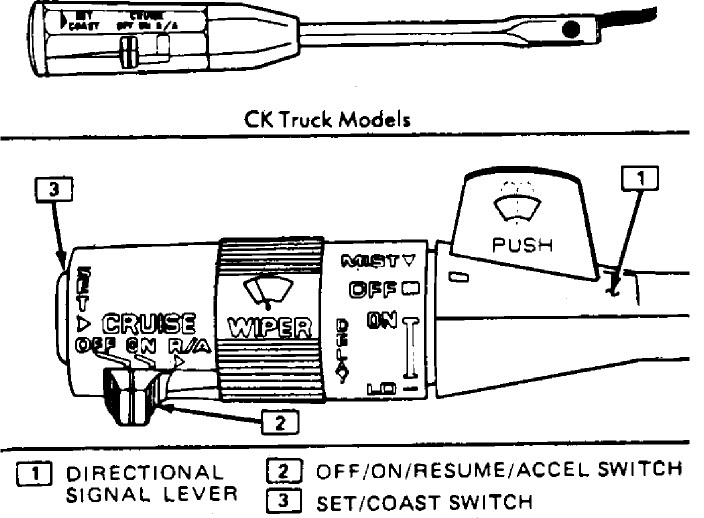 
Servo unit operation:
The servo consists of a vacuum operated diaphragm, a normally open solenoid valve to vent the diaphragm, a normally closed solenoid valve connecting the diaphragm chamber to the vacuum source, and a variable inductance position sensor that provides the module with servo position data. The servo operates the throttle in response to control module commands as follows: when the system is engaged and operating at a steady rate of speed, both solenoid valves are closed. Vacuum is trapped in the diaphragm chamber exerting a constant force on the diaphragm and the throttle position remains fixed. When the vehicle is losing speed due to increased load, or when the operator seeks to increase speed through the control switch assembly, the module energizes the vacuum valve solenoid. This increases the force exerted on the diaphragm, which in turn increases the throttle opening. When vehicle speed increases above the pre-set cruise speed, or when the operator seeks to decrease speed through the control switch assembly, the module de-energizes the diaphragm vent valve solenoid. This opens the valve, decreases force on the diaphragm, and allows the throttle return spring to decrease the throttle opening. During normal operation, the module will pulse the operation of the vent or vacuum valves, as needed, to maintain the set cruise speed. The average duration of each pulse is 10 milliseconds. If vehicle speed drops 5 m.p.h. below set cruise speed, the module will hold the vacuum valve in the completely open (energized) position. If vehicle speed exceeds set cruise speed by 3 m.p.h. or more, then module will hold the vent valve in the open (de-energized) position. The module will hold the valves open until the vehicle speed matches the set cruise speed. The diaphragm vent valve will also remain in the fully open position if the brake or clutch pedal is depressed, the ignition is switched off, or if an open circuit exists in the system feed circuit or in the servo position sensor. 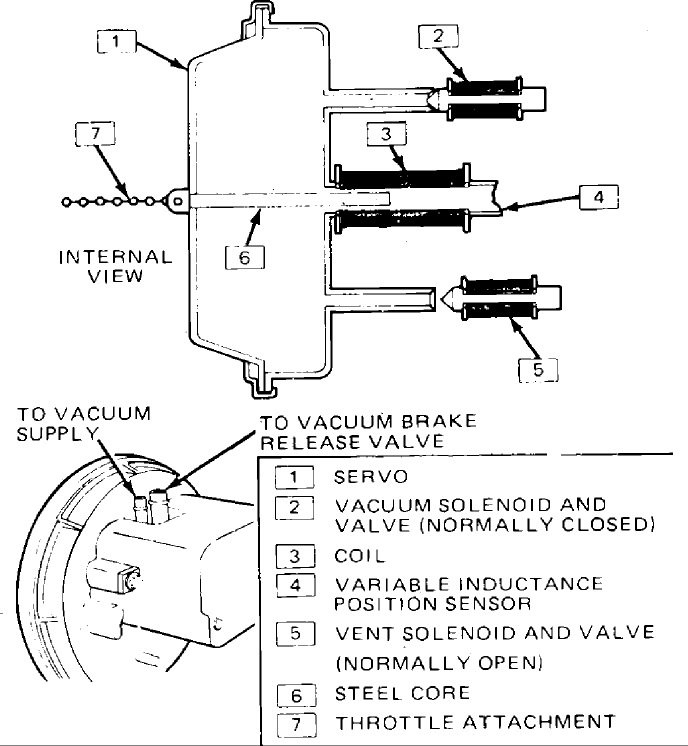 Vacuum system operation:
The vacuum accumulator helps even out flucuations in engine vacuum that would cause the system to run erratically. The vacuum check valve makes sure that vacuum is maintained in the system and that air cannot flow backwards from the engine into the system at times when a vacuum might not be present. The brake switch vacuum release valve will open the system to release vacuum when the brake pedal is depressed, deactivating the vacuum holding the servo diaphragm. This ensures the system is not active when the brake pedal is depressed, regardless of any electrical input. 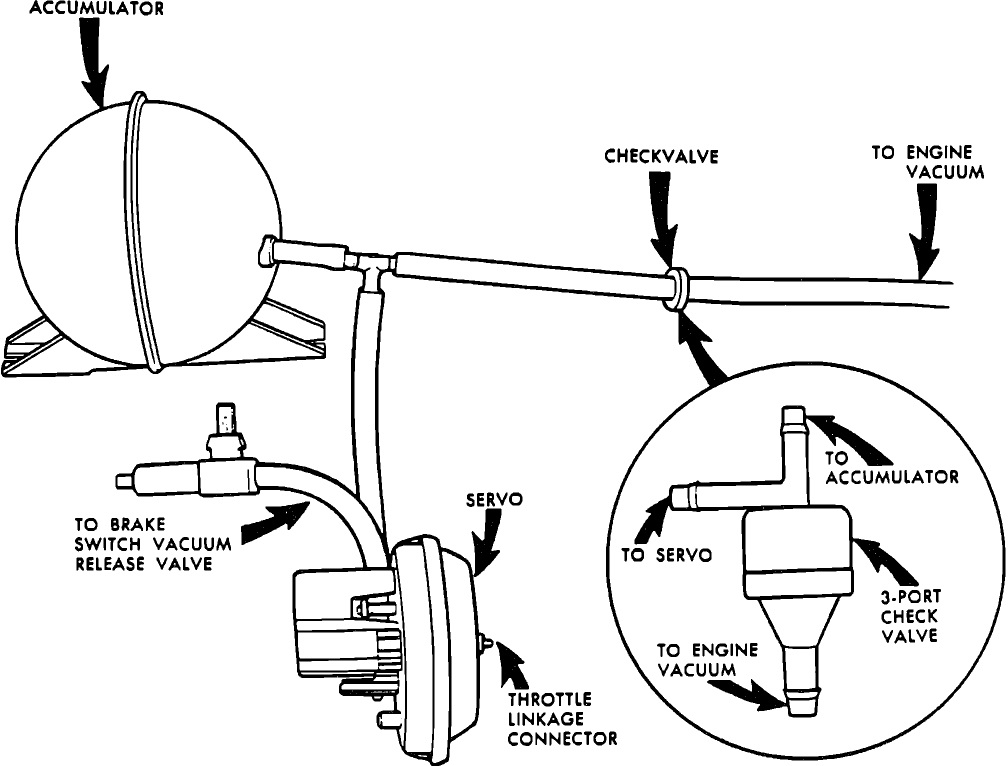 Electrical system operation:
The electrical side of the system allows the user to control inputs on the steering column stalk, as well as regulating the system based off of vehicle speed. The speed signal comes from a unit wired to the back of the speedometer. The speedometer cable drive input is converted to an electrical signal in the Vehicle Speed Sensor, or VSS. This is sent to the Electronic Controller Module, which interprets all the electrical inputs to control the servo to regulate the throttle position during cruise control function. 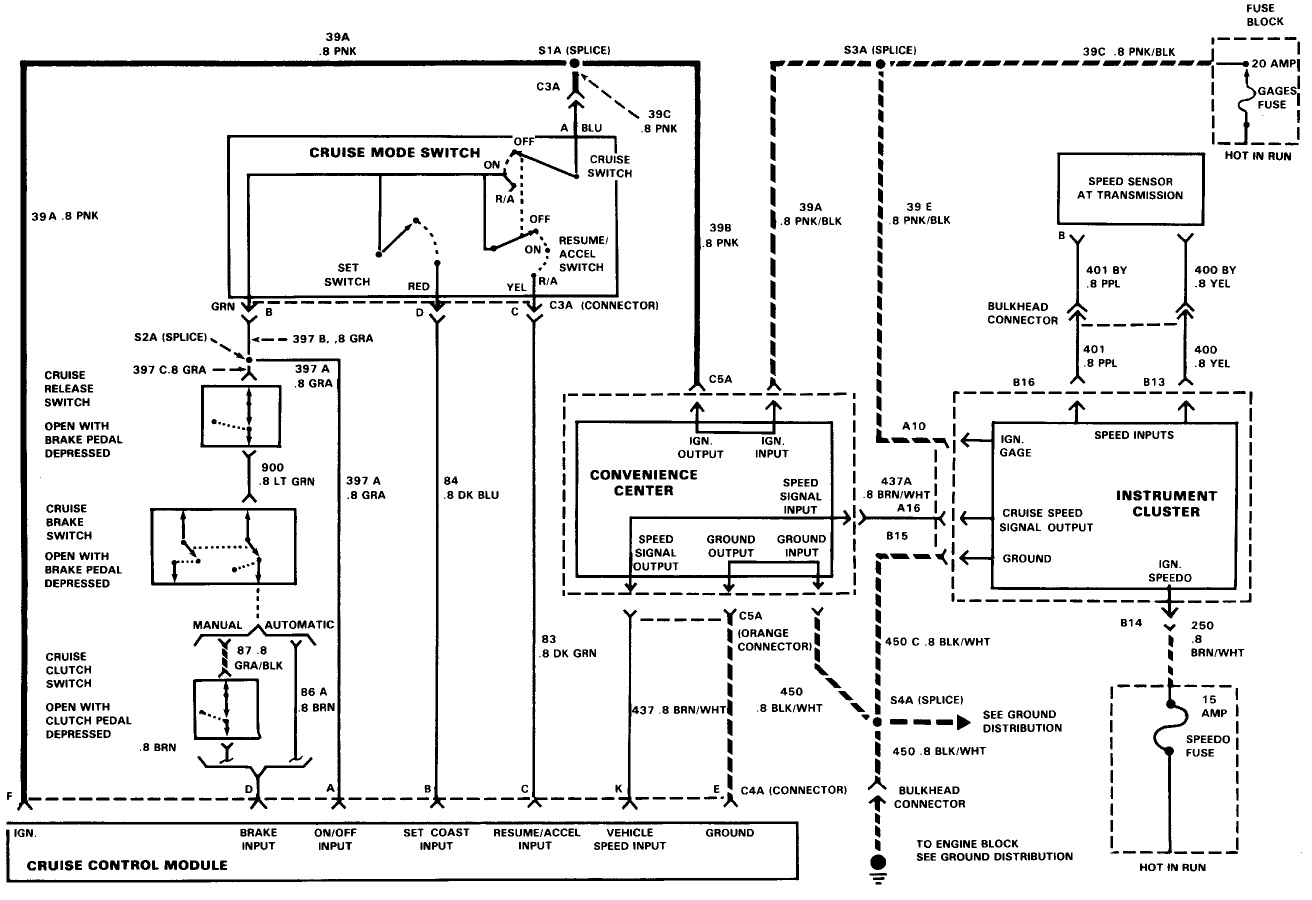 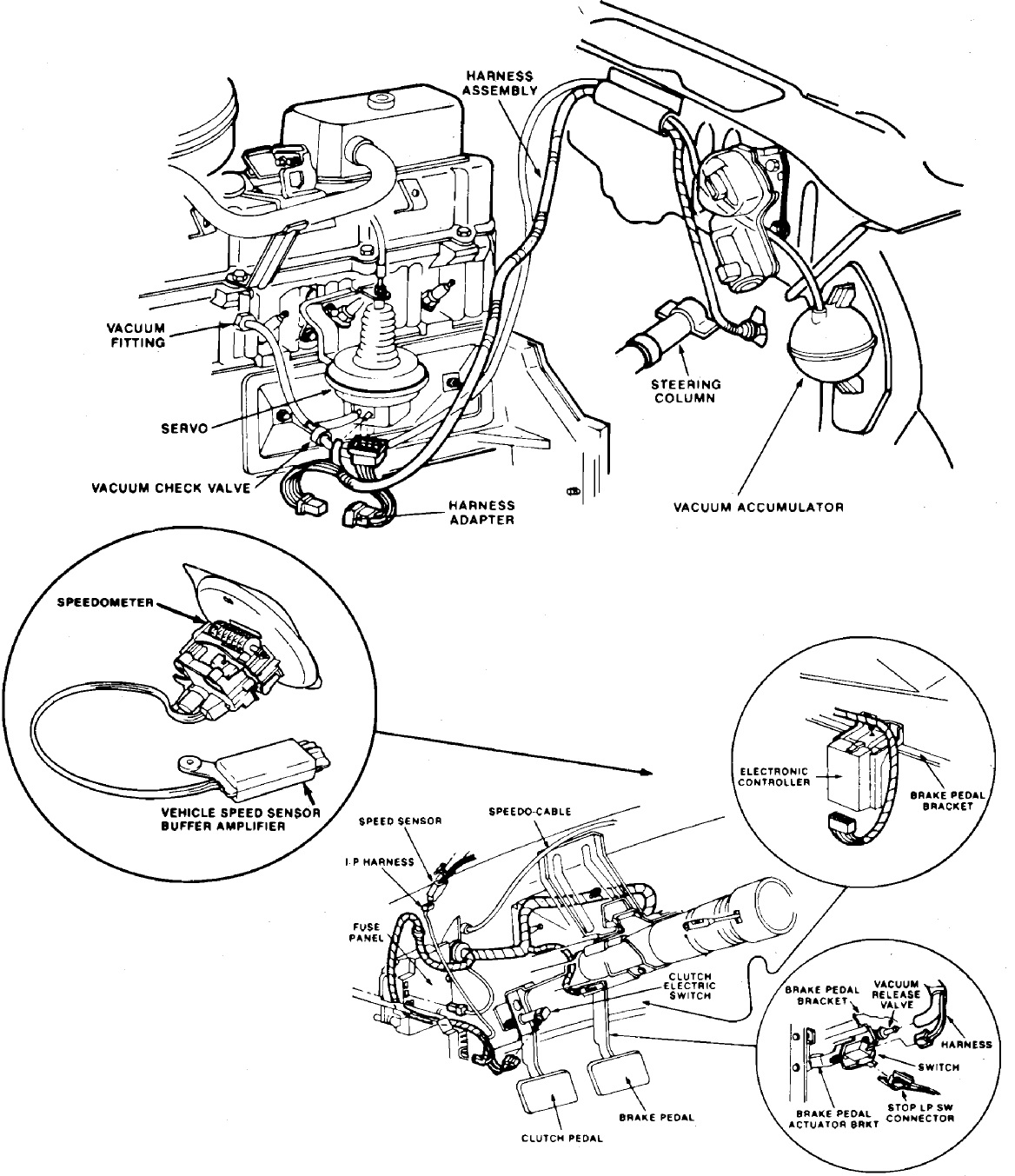 
Of note for general troubleshooting if none of the fuctions work, or it there is intermittent function: a common failure point is the wire from the control stalk where it passes into the steering column from the stalk. As the stalk is moved, the wire can be pinched over and over if it falls into the wrong position. This can lead to eventual wire separation and failure. 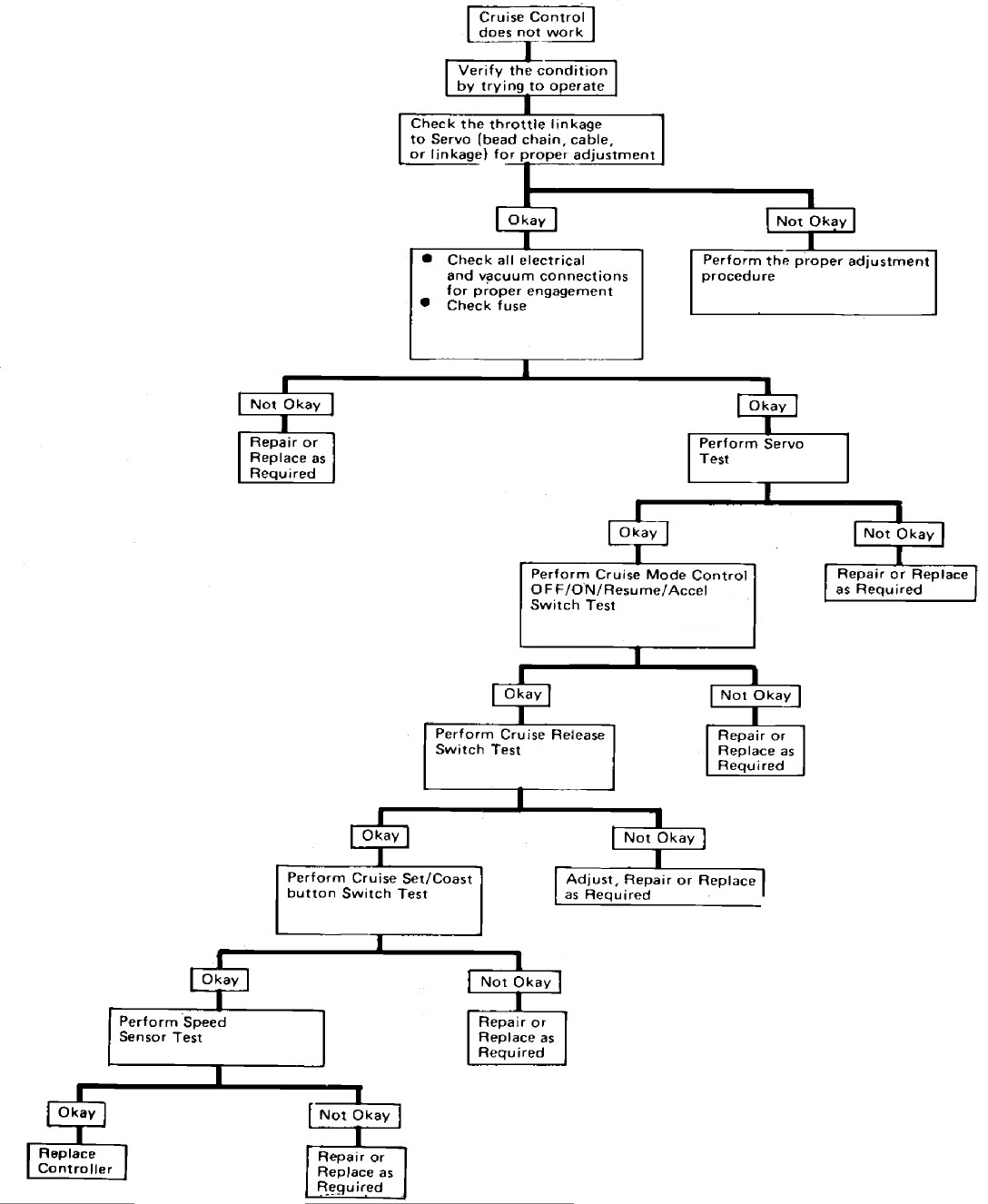 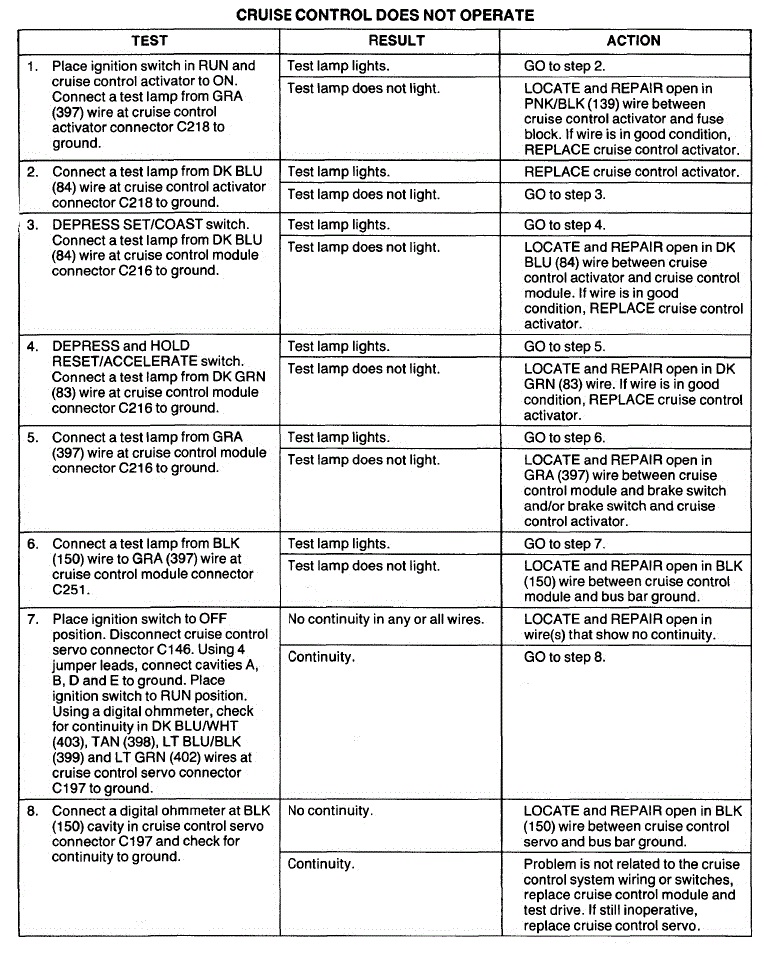 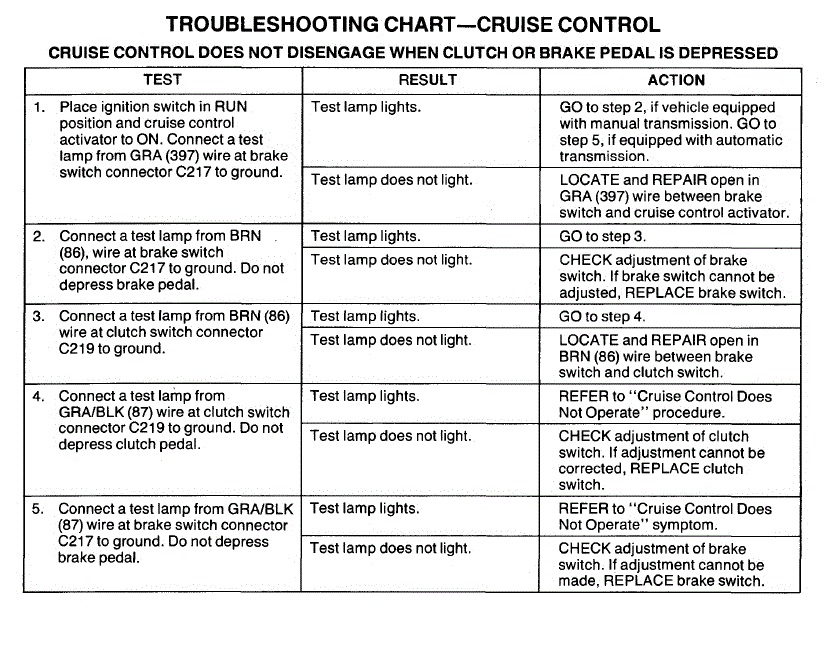 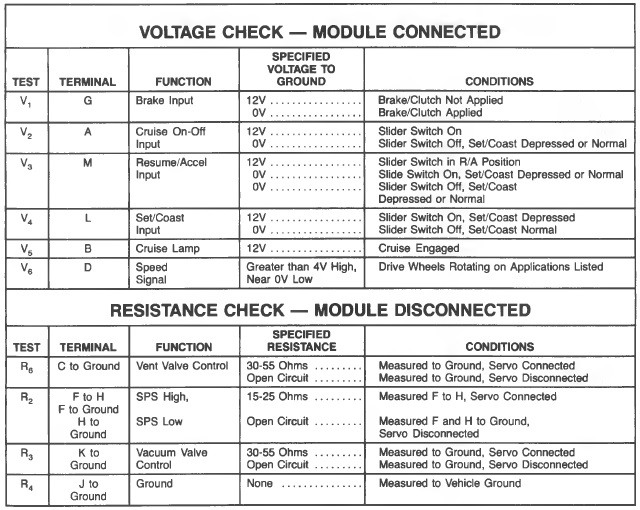 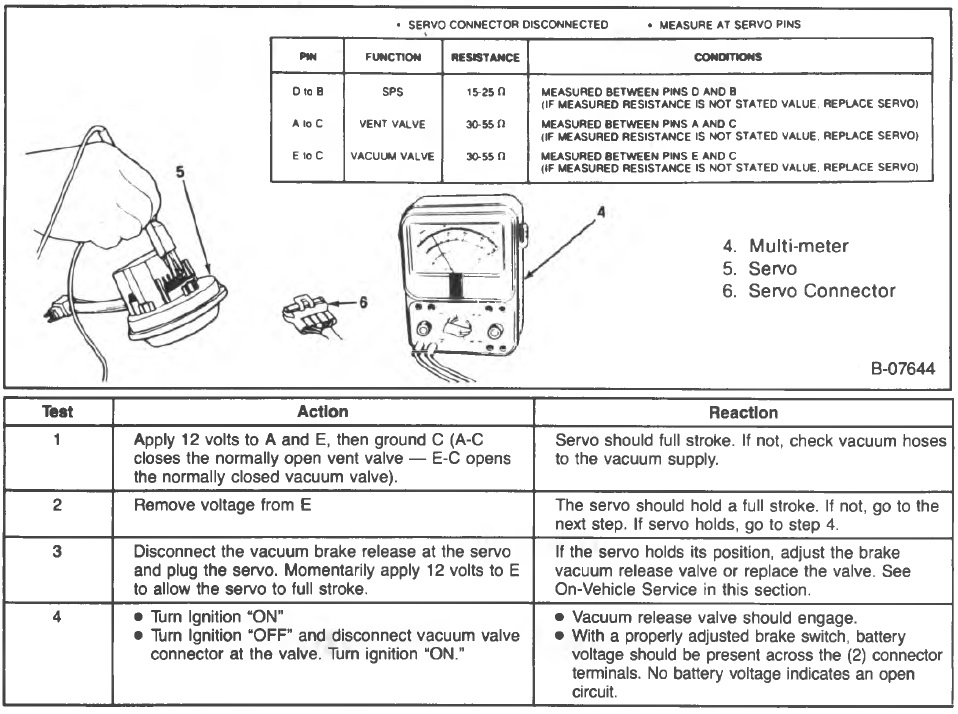 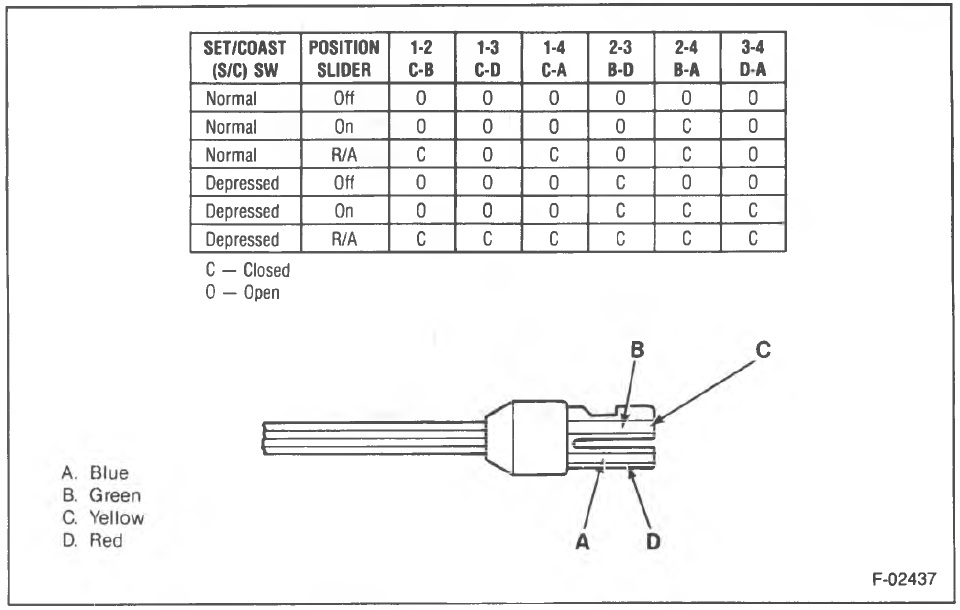 The switch is both easily checked, and sometimes easily repaired. Both functions can be easily checked with a vacuum gauge and and meter. If the vacuum side is defective and no mechanical damage is not evident, the o-ring is easily replaceable. The electrical contacts can also wear over time, which provides a loss of continuity, or a temporary loss at times which can disengage the cruise contral erroneously. This my be able to be fixed by slightly and gently bending the contacts closer to center, or widening the connection bridge on the plunger slightly to account for wear. 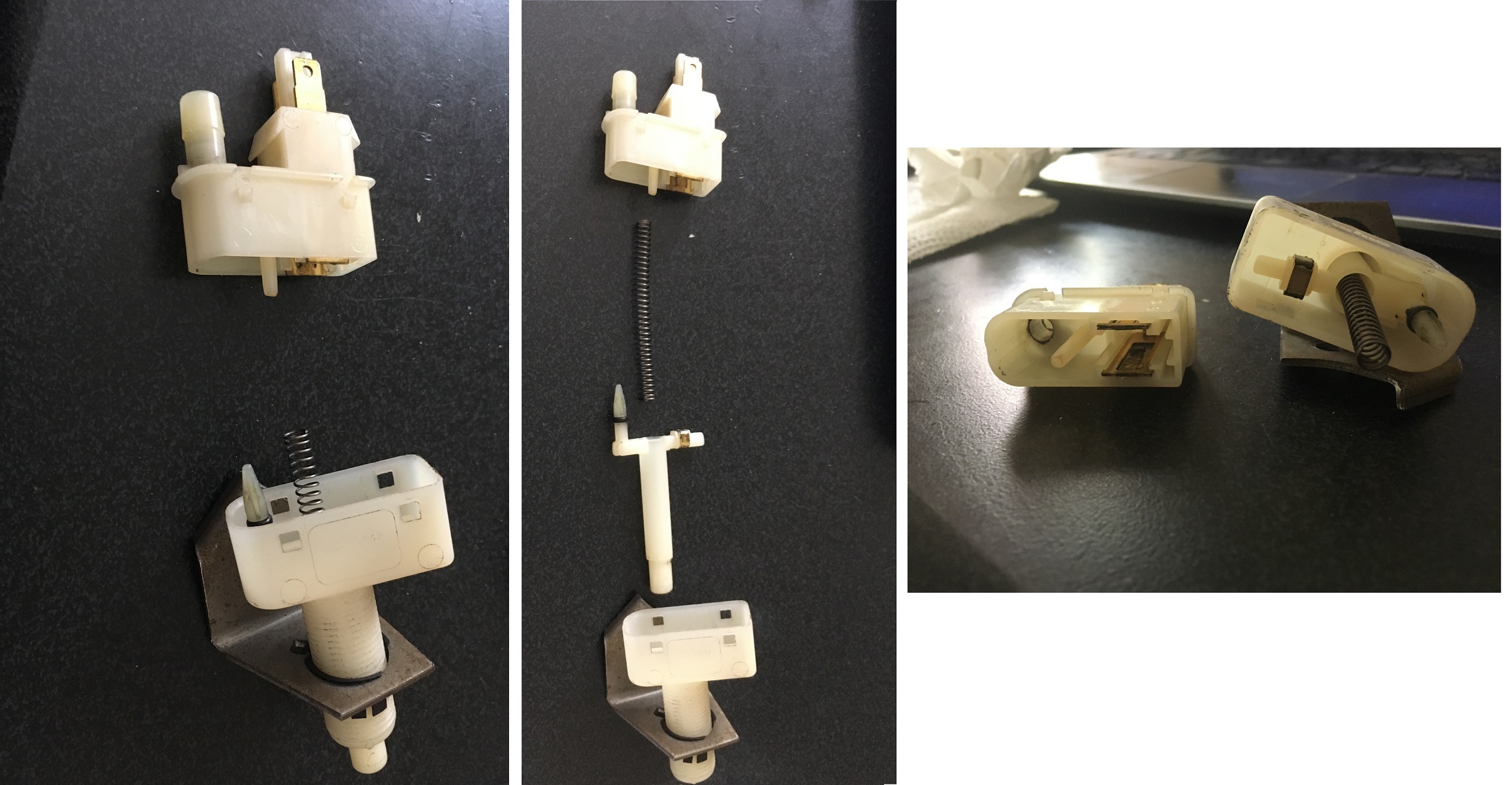 The tests for the switch assembly are straightforward, and are listed in the troubleshooting section. However, of note is the potential wire pinch-point where it enters the steering column. There is sometimes a slot in the upper casing of the directional/high beam switch which is intended to hold this wire back away from the pinch-points created by the lever movement. If the wire comes free or is not installed correctly, the wires can be pinched and, over time, frayed. If one of the four wires to the switch is found to have no continuity, or the switch shows no or intermittent funtion, this could be the reason.

This early type can be interchanged with the later type, or just the 'spray' switch portion may be changed. If just the 'spray' activator is changed, the old stalk must have a hole drilled in the plastic portion for the wire to pass through as seen in the photo below.

Continuity can easily be checked by accessing the lower plug at the bottom of the steering column above the brake pedal. Then the switch assembly can be pushed out from the end of the stalk enough for checking purposes. Dissassembly is accomplished by carefully prying off the end cap of the stalk with a sharp knife blade, being careful not to use too much pressure and damage or break the plastic. Once loose, the cap and end button may be pulled free. Gently work some slack in the wire where it joins the steering column, and carefully pull the switch assembly from the end of the lever.

If the switch assembly itself is bad, it can easily be un-soldered and a replacement soldered in. The switch and stalk may then be put back together. This prevents the pain and suffering of replacing the entire stalk and wire, which runs down through the steering column.

If the wire is found to be compromised at the column entry point, there is usually enough slack in the wire length to pull the wire out and shorten it the three inches or so up to that break point. If this is not possible, the entire wire must be removed from the steering column which is far less easy to do.