Welcome to our database on the GM Passlock II system.

This page covers in detail how the system works, what it does (and does not do), and details about maintenance and bypassing.
System summary
Functionality
Malfunctions
Reprogramming
Bypass


The GM Passlock is not a transponder system. It uses a previously a normal metal key and recorded voltage measurement through a Hall Effect sensor to determine if the lock cylinder is aligned and in place during vehicle starting. This is the only security affect provided by the system.

The sensor reading, if in approximately 5-10% of a previously recorded value, will allow the BCM (Body Control Module) to send a code to the PCM (Powertrain Control Module) allowing the engine to start/run. Other security is supposed to be provided by having the properly cut key to access the door and turn the ignition cylinder, since removing the ignition cylinder is supposed to deactivate the vehicle (more on this later).

Inserting the properly cut key will align the lock tumblers and retract the cylinder lock bar, allowing the cylinder to rotate inside its casing and activate the ignition switch on the far end of the cylinder.

The Passlock II key is a standard double-sided GM key, with no markings on the shaft. The end part of the key has a long oval hole.


The key is a normal double-sided GM key, the only function of which is to engage the tumblers correctly to allow the igntion cylinder to rotate.

The ignition cylinder works like a standard ignition, engaging the rotary switch with the end of the cylinder. Once removed, the ignition switch itself can be positioned by inserting and turning a screwdriver inside the cylinder casing. To remove the cylinder from the casing, the key is inserted and turned to 'start' position, then a small pin or screwdriver can be inserted through the top hole to depress the spring-loaded retainer, then the cylinder can be pulled straight out.

On the rear of the casing is a key-retention solenoid, which prevents the cylinder from being rotated into 'Off' when in gear to prevent key removal unless the ignition switch is in park or neutral.

On top and slightly to the rear of the casing is a 'key-in' normally-open pushbutton switch. This switch rides in a groove in the lock cylinder that closes it at certain points in the cylinder's rotation and opens it in others.

When the cylinder is rotated, the magnet slotted into the side comes into alignment with the Hall sensor. This changes the resistance in the sensor and sends a reference voltage to the BCM down the signal wire. If the pre-programmed reference voltage matches what is recieved within tolerance, then the BCM will send out the proper code to the PCM allowing start/run. Different size magnets will produce different reference voltages, providing the variance between different lock cylinders.

As long as the key functions mechanically in the cylinder, the ignition switch connections will always be made. Only the reference voltage from the Hall sensor determines whether the engine will be allowed by the computers to run.


Although the Hall sensor can fail, it is not a normal common failure point. Hall effect sensors are very simple in operation. The permanent magnet in the lock cylinder provides a magnetic interferance in the sensor proportionate to the strength of the magnet. This resistance lowers the voltage output to the reference wire by a certain amount, also proportionate to magnet strength.

Since the sensor is unlikely to fail or the magnet strength to change, the variables are mostly mechanical or electrical. If the voltage to the sensor falls, the output reference voltage will also fall. This is why a weak battery may sometimes prevent the vehicle from starting.

Mechanical failures are mostly limited to extreme temperature differences that can change the distance between magnet and sensor due to shrinking or expanding of the metals. This in turn also changes the resistance. Dirt or debris failures are uncommon and unlikely due to the sealed nature of the unit, although possible.

These variances are why there is a 5 to 10% tolerance built into the system. However, very extreme temperatures or very low battery voltages may fall outside these tolerances and prevent the vehicle from starting.

If the wiring to the system gets frayed or shorted or too worn, resistance in the wires will increase and also may allow the reference voltage to drop out of tolerance. This wear can be fixed with a recalibration or reprogramming sequence to learn the modified resistance, just as if a new cylinder with a different magnet were installed. However if the wiring is broken, the system will no longer function.


If a reprogramming/relearn of a new reference voltage is required, there is only one method without accessing the system with a GM Tech2 tool.

The relearn procedure is required when either the BCM is changed/disconnected, or the battery completely discharged or disconnected, or a different lock cylinder and/or casing installed, or BCM power fuses are changed or removed. There is no backup battery to store the value in the BCM, so any time power is disconnected the value will need re-learned.

Note that FACTORY programmed BCM's will automatically learn the cylinder reference voltage at the first key turn after installation, being pre-programmed up to step 5 before installation. In this way GM did not have to do any programming on the production line, just plug-and-play. BCM's programmed by other than FACTORY TOOLS will require a relearn procedure.

Relearn procedure:
1) Turn the ignition switch to the 'Run' position. Wait several seconds, then turn the switch to 'Start' for several seconds, then release the key back to 'Run'. The security light should be on/blinking.
2) Wait approximately 10 minutes for the light to turn off. If the light does not turn off after more than about 12 minutes, something other than the Passlock system requires maintenance.
3) Turn the ignition to 'Off' and wait 5 seconds.
4) Repeat steps 1-3 two more times for a total of 3 cycles/30 minutes.
5) The BCM will now read and store the new system reference value on the next ignition cycle from 'Off' to 'Start'.
6) Start the vehicle and clear any codes in the system.


Contrary to popular belief, it is extremely easy to permanently bypass the Passlock II sensor system as long as the proper key for the lock cylinder is present.
The top plastic cover of the steering column must be removed to expose the wiring. The Hall sensor has a plug with three wires coming from it on the top of the lock casing. The sensor wire to the BCM is yellow. The others are battery + and ground.
With the ignition off, cut the yellow wire. At this point there are two options: match existing circuit resistance or just install a resistor within a proper range and do a relearn. If you do want to try to avoid a relearn, measure the resistance between the yellow wire and ground, and match as closely as possible. If not, just pick a resistor (value isn't terribly important, but about 50 Ohms works well).
Solder the chosen resistor to the end of the yellow wire going to the BCM. Solder the other end of the wire to the ground connection coming to the Hall sensor (usually the black or orange/black wire but verify on your wiring diagrams). Tape off or shrink-tube any exposed connections and replace the plastic column cover. 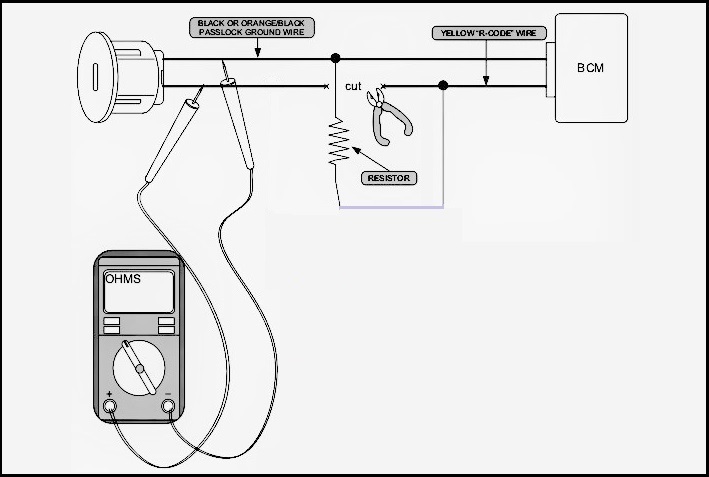 Also contrary to popular belief, it is possible to bypass the Passlock II system if you have lost the proper key, although it requires time and effort based on certain skills, and will permanently damage the lock cylinder and probably the casing. This method should only be used when all other methods are exhausted.
This method depends on mainly defeating the mechanical portion of the switch by drilling out the lockbar so the cylinder can be rotated freely. We recommend approximately a 1/4" diameter drill bit centered about halfway between the inscribed circle in the black plastic of the cylinder and the key insertion hole as shown in the picture below. Drill at increasing depth, stopping to check if the cylinder yet rotates before drilling deeper.

The cylinder can then remain in place and be rotated without a key; nothing further needs done as the key itself need not be present for the Passlock system to function.

If the cylinder is destroyed in the removal process, the ignition switch can internally be rotated with a screwdriver, however the Passlock sensor must still be defeated. At this point it can either be bypassed using the first method above using a resistor, or removing the magnet (or that cylinder portion) from the cylinder and gluing it against the hall sensor in the proper position. Either way at this point if a relearn procedure is required the key is no longer necessary and no matter what the vehicle can still be driven.

Note that if you want to operate the ignition without ever having to use a key, and you already have a key, merely remove the cylinder, take out the lockbar, and reinsert the cylinder. Without the lock bar no key is required for operation.