There is a lot of confusing, contradictory, or misleading information out there regarding these trucks. This database contains information based off of GM records, formal documents, literature, or firsthand experience.
Identification
Cabs
Chassis
Assembly and manufacturing
Engines
Transmissions
Axles
Options and equipment
References


1991 to 2002 General Motors 3500HD trucks are not merely a heavy duty version of the the 3500 trucks, as in later years. The chassis and many other components are entirely different, and had their own chassis designation of GMT455. These trucks were designed to fill a market void for GM in the class 4 truck category.

Offered in both GMC and Chevrolet versions (only name/badging differences), the design goal was to create a class 4 truck in the 15,000 lb GVWR range, have it look as much like the regular pickup truck line as possible, and use as many things from the GM parts bin as possible to keep cost down.

This unique chassis carried the GMT-455 designation, since it was vastly different than the GMT-400 chassis. It was to have larger brakes, heavier duty axles, a heavier frame, and an industry standard 34" rear chassis for easy upfitting. It was to have an easier load and entry height than other large trucks, and basically be more marketable to those seeking a big truck with small truck looks and efficiency. 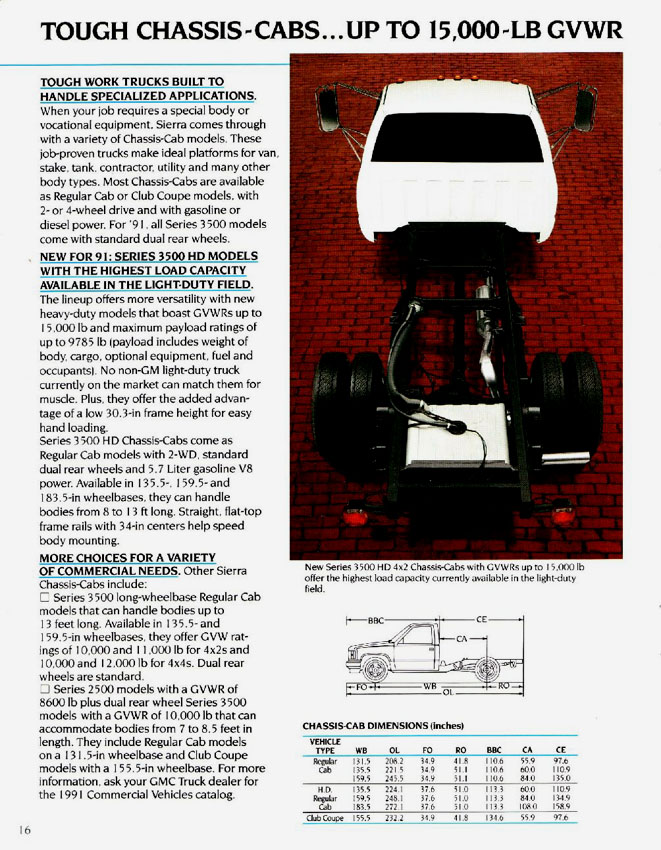 There are obvious visual differences between the GMT-400 and GMT-455 lines, as seen in the picture below. The larger wheels in the 3500HD have 5 holes instead of 4. The bumper sticks out further forward, and has a spacer between bumper and grille. The entire cab sits higher. The fenders have flares above the front tires. The lower door nameplates have "HD" after the 3500 designation. 1995 and later 3500HD trucks have the larger door handles. The GMT455 chassis also has larger 19.5" wheels versus the 16" of the standard 3500 to package the larger brakes.


up until the 1996 model year, only regular cab options were offered from the factory. 1996 and later years had the option of a crew cab. No production extended cab models were ever offered.

There has been much debate whether the crew cab option was provided directly off the standard factory line, or produced as a standard cab and then sent to another plant for conversion into the crew cab. If this latter option was the case, the cab would have been chopped behind the rear doors and the back part added on, with the frame also being cut and extended. If the former option, then a complete crew cab from the medium duty Kodiak/Topkick line would have been substituted, as it also appears to have been an option in that line as well.

Documentation of 3500HD crew cab trucks seems to indicate they have the original two door VIN, which would indicate they were manufactured as regular cabs and then modified. Using this method, GM would have cut the regular cab 3500HD, and extended it, preserving the VIN plate on the original sheet metal and sidestepping some VIN tampering laws. If the trucks were manufactured as original crew cabs, unmodified, why would they have kept the two door VIN?

Factory documentation specifies that these trucks used the same cab as the Kodiak/Topkick medium duty trucks. Experience indicates that 3500HD and 1500/2500/3500 cab body mount parts are the same.

We know for certain that no special crew cab frames were made. All were cut and spliced longer under the cab. 3500HD crew cabs have the wrong wheelbase specified versus what is measured, meaning they came off the factory line originally at one length and were modified at some point.

But were the cab units themselves cut and spliced? Here is what we know and what we have heard:
-We know the same stampings behind the rear door were not used between regular and crew cabs, due to the lack of the 'character line' even with the rear door window on teh crew cab. This is clearly a different sheet metal stamping. This lack is visible on all crew cabs whether GMT-455 or GMT-400 versions.
-We know the rear floor section of the regular cab was not reused for the crew cab 3500HD, or indeed any crew cab. The cab rear floors are different.
-We know that the same cab rear panels were used on both regular cabs for the light duty and medium duty trucks. This is verifiable through photographs.
-We know for certain the same doors were used interchangeably, as well as glass, mirrors, and as many common parts as possible.
-We know upfitters were making aftermarket crew cab conversions for the medium duty Topkick/Kodiak line prior to 1996, when the 3500hd was offered with a factory crew cab.
-Centurion did some regular to crew cab conversions on GMT-400 1500 series trucks by splicing cabs together to preserve the original firewall/VIN plate.
-Rumors say stock light duty crew cab carpet kits do not fit a 3500HD without modification.


We are currently doing continuing research on this topic. We don't know for certain at this time what method was used to create the factory 3500hd crew cabs. If you have any information or documentation on this topic just let us know here.


Frame:
-Combination welded and riveted frame, extensive weld fixturing and robotic welding.
-135.5", 159.5", and 183.5" wheelbases, all with 34" frame rail centers from cab backward.
-Design specification was low 30.3" frame height for easier loading than heavy trucks.
-Designed for a 9,785 lb. payload including occupants, body, cargo, optional equipment, etc.
-Radiator support and grille riser/filler piece are unique to GMT-455 chassis, to allow the use of a 19" x 32" x 2-1/8" radiator (larger than full-size pickups). This allows the truck to function without an auxilliary cooling fan even under idle-soak conditions with a 37" x 3-1/4" grille opening.
-Notes: after first few years extra support plates were added on frame behind the cab, it was found for uses like rollback bodies the frame would be too stressed with the counterweight on the rear. In 1994 models GM started adding frame re-inforcement plates behind the cabs, this being the weakest point.

Wheels:
-19.5" x 6" wheels, hub piloted, 10 lugs on 7.25" bolt circle, 5.25" hub bore, stock are Accuride 27775 steel. 10 lugs used on rear, 5 lugs used on front. Wheels used a lug reinforcing plate between wheel and nuts.
-All tire and wheel combinations balanced to same specification as light duty trucks, no more than 6 oz. out of balance prior to final correction of 0 oz. of imbalance.


Janesville, WI plant:
In 1990 the GMT455 assembly line started at the Janesville plant in the tire warehouse. The line started with eighteen employees on chassis and final production. Five field-test vehicles went to customers around March 1990, with limited production beginning in June. Twenty pre-production prototypes were tested to 750,000 miles.
The first regular production truck offically rolled off the line on October 9, 1990, a Tuesday (according to local news reports from Thursday Oct. 11, 1990). Production started at 5 trucks per day on the assembly line, escalating to 22 to 26 trucks per 10-hour shift (only one shift was scheduled initially).
The cab unit was also produced at Janesville, being the same as the medium duty version, and made on same assembly line as medium duty trucks.

Flint, MI plant:
The Flint 3500hd line started in 1997. Only Summit White cabs sold for domestic use were produced here. All other 3500hd units were still produced at the Janesville plant.


5.7L (gas):
-Only available with manual transmission. Since the initial units were not available with manuals (those being not production-ready), no initial units have the 5.7L engine.
-Throttle body injection.
-190hp at 4,000 RPM.
-300 ft-lbs. at 2,400 RPM.
-Notes: this engine option is hard to find. Actual production numbers are unknown at this time, but reportedly very low.


-All units had the front 4" lower grille filler piece to allow more engine compartment vertical space.
-All 3500HD trucks had plastic front fender flares.
-Upper cab marker/clearance lights were standard equipment.
-GMT-455 units used the same cab sheet metal as medium duty (Topkick/Kodiak lines), but the dashboard, steering wheel, gage cluster, etc. was from the GMT-400 line.
-Either 'west coast' or 'camper' style mirrors were offered. No regular mirrors.
-Mid-mount fuel tank was standard (22 gal.), rear tank optional (30 gal.). At least in the beginning no option to connect tanks was offered, meaning one or the other had to be specified not both.
-1994 and later cabs used the medium duty door handles.
-All units were fitted with hydroboost brakes, run off the power steering pump. The brakes were equipped with a height-sensing load proportioning system to allow automatic front/rear pressure split based on load.
-All trucks had power steering with 14:1 ratio packaged in same housing as full-size pickup trucks. Pump output was increased by 6% for lighter steering effort when loaded.
-All units had the same 4 wheel disc brakes, with ABS added in later years.
-All units were sold in a cab/chassis configuration with rear straight and flat 34" frame rails for upfitter body mounting, and an extended fuel filler hose for the same reason.
-All units had a transmission tailshaft mounted parking brake, due to the use of the rear disc brakes. This brake was pedal operated rather than the lever used on other GM prop-shaft mounted brakes.
-All trucks regardless of powertrain had 15,000 lb. GVWR, and 10,000 lb. tow ratings, and 19,000 lb. GCVWR.
-All trucks single axle dual rear wheel, regardless of frame length.
-Cab interiors followed along with the 1995 GMT-400 style changeover, unlike the medium duty trucks.
-All exhaust systems were single-pipe 3" diameter stainless steel, exiting on the passenger side behind the rear wheels.
-19" x 32" x 2-1/8" radiator in all units (larger than full-size pickups).
-No 4x4 offered from factory, but aftermarket conversion companies offered 4x4 with dana 60 or 70 front axle. Monroe Truck offered ship-through upfit 4WD using RPO code VCB.
-Spare tire is an option, to be strapped to rear frame rails at factory when ordered.
-Goodyear 225/70 R19.5 "F" tires.

Article from the Janesville Gazette: https://www.GazetteXtra.com/gmtimeline/